The Copernicus Programme - the EU Earth Observation and monitoring programme - is a cornerstone of the European Union’s efforts to monitor the Earth and its ecosystems, whilst ensuring that citizens are prepared and protected in the face of crises and natural and man-made disasters. The fundamental pillar of the Copernicus Programme are six cross cutting thematic services, namely Land Monitoring, Marine Environment, Atmosphere, Climate Change, Emergency Management and Security.

Read the article on the Copernicus Observer newsletter 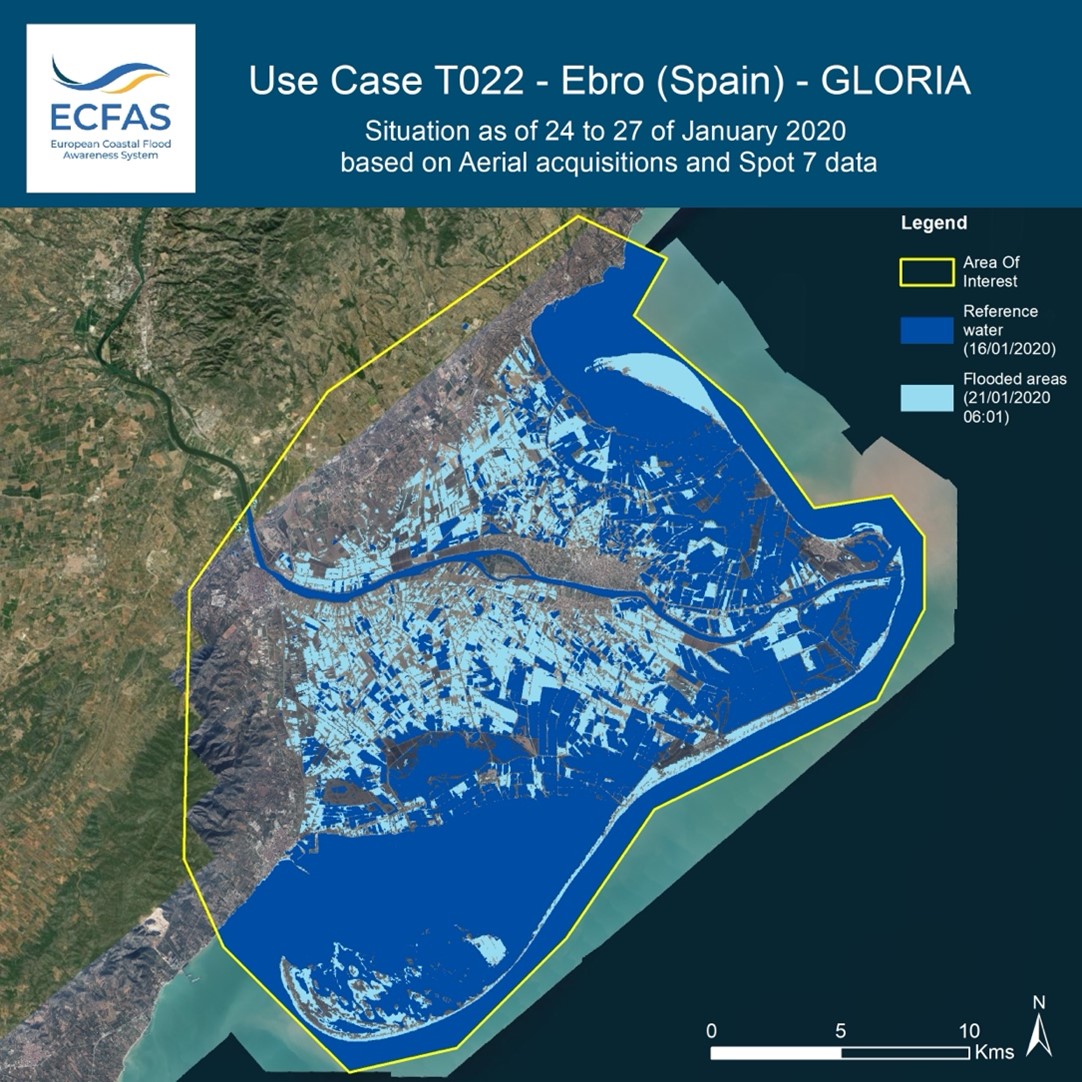 January 2021 saw the launch of development of a new coastal flood awareness system that could become a candidate to join the Copernicus suite of services. This new system could contribute to the Copernicus Emergency Management Service (CEMS) by demonstrating the feasibility of a European Coastal Flood Awareness System (ECFAS) that will complement the existing framework for large trans-national river systems. ECFAS will also develop innovative solutions for providing rapid mapping of forecasted flooding and will benefit from the integration of space research with other non-space domains, like oceanographic modelling and coastal risk assessment.

Last year, several storms affected European coastlines, from the North Sea to Mediterranean countries. Storms Gloria, Ciara, Dennis and Brendan caused significant damage, extensive flooding and the erosion of coastal areas across Europe, from the Mediterranean to the Northern Atlantic and the North Sea. The Ebro Delta in Spain suffered flooding up to 3 km from the coastline with 30 square kilometers of rice fields destroyed and causing an estimated loss to the national economy of several million euros. This impressive sequence of disasters highlighted the urgency of implementing an operational system at the European scale, able to provide useful and timely information on coastal flood risk from extreme sea level events, for preparedness, response and recovery purposes.

In Europe alone, more than 50 million people live in the low-elevation coastal zone and 30 million in the 100-yr event flood coastal plain (Neumann et al., 2015). These areas are heavily populated with population density in coastal regions being three times higher than the global average (Small and Nicholls, 2003). Critical socio-economic activities and infrastructure are concentrated in the coastal zone, e.g. ports, maritime transport networks, recreational facilities. The population exposed to coastal flooding is predicted to increase to up to 1.52–3.65 million by the end of the century. In parallel, the present expected annual damage of 1.25 billion Euro is projected to increase, ranging between 93 and 961 billion Euro by the end of the century, thus increasing of two or three orders of magnitude (Vousdoukas et al., 2018).

ECFAS will provide a much-needed solution to bolster coastal resilience to climate risk and reduce population and infrastructure exposure by monitoring and supporting disaster preparedness, two factors that are fundamental to damage prevention and recovery if a storm hits. ECFAS will provide a “Proof of Concept” to demonstrate the practical feasibility of a coastal flood awareness system. Through a series of test cases (case study sites), ECFAS will build on existing tools from the Copernicus compendium, customizing them for applications in the coastal zone at pan-European scale.